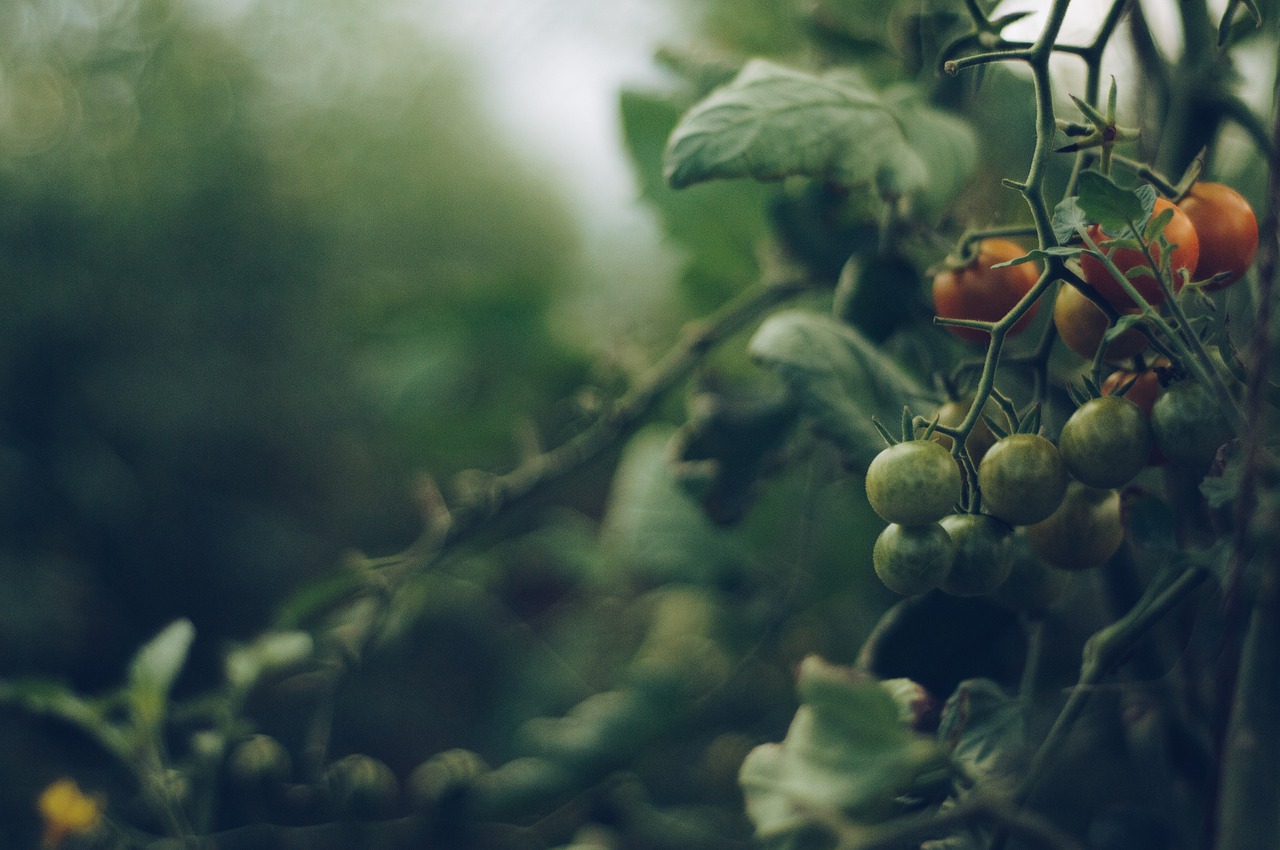 Tomatoes were originally grown and eaten by the native people of South and Central America. In fact, wild tomatoes still grow in Peru. The name, tomato, comes from the Aztec term for the fruit, “tomatl.” They were brought to Europe by Spanish explorers in the 1500s, where they were first grown for ornamental purposes. In Britain, they were considered poisonous due in part to the plant’s resemblance to deadly nightshade (tomatoes are, in fact, members of nightshade family, as are potatoes, peppers, and eggplant). It didn’t help that the gentry of the day ate off of pewter plates, which led to many deaths from lead poisoning. The natural acidity of the tomato probably helped leach an extra helping of the toxin into every spoonful.

Luckily for all of us, pizza was invented in Naples in the late 1800s, and Europe’s love affair with the tomato began. English colonists to the Americas originally brought their distrust of the fruit with them, but by 1897, when Joseph Campbell determined that tomatoes keep well when canned, and began selling his signature condensed tomato soup, the tomato was welcomed to tables across North America.

Tomatoes were believed to have aphrodisiac properties from as far back as their origins in the Andes, and in the 1930s, a physician named John Cook Bennett took it upon himself to preach what he claimed were the miraculous health benefits of the fruit. If Bennett was to be believed, tomatoes were a panacea, curing everything from diarrhea to rheumatism. While his unproven claims about the miraculous benefits of tomato consumption were questionable at best, he was the first to suggest ketchup be made from tomatoes instead of mushrooms or fish, and for this we thank him.

Tomatoes (also known as love apples, pomme d’amour, pomme d’or, raktamaci, tamatar, and tomate, among other names) contain a wealth of antioxidants like lycopene, lutein, vitamins A, C, and K, β-carotene, and folate. They are also an excellent source of fiber. Lycopene, one of the carotenoids that give tomatoes their red hue, has shown promise against cardiovascular disease, macular degeneration, and cancer (which we will discuss in more detail below). Lutein, another carotenoid found in abundance in tomatoes, has also been studied for its ocular health benefits, and its role in cancer prevention, cognitive function, and heart health.

Unfortunately, consumption of many common foods can reduce the beneficial effects of tomatoes. Foods that are high in iron, such as red meat, spinach, and bread products made from iron-fortified wheat appear to impair the body’s ability to metabolize lycopene. As the lead author of a 2019 study said, “Nutrition can play an important role in disease prevention, but it’s important for us to gather the details about precisely how what we eat is contributing to our health so that we can give people reliable, science-based recommendations.”

Did you know? Since 1945, on the last Wednesday in August, in the Spanish town of Buñol, a massive battle called La Tomatina has ensued. For exactly one hour, participants throw squashed tomatoes at each other, drenching the street, buildings, and themselves with the acidic juice and pulp. Sadly, La Tomatina was canceled for 2020 due to the COVID-19 pandemic. Hopefully, the food fight will return in 2021.

The antioxidants and nutrients packed into tomatoes help to make this fruit a promising weapon in the cancer research arsenal. A sampling of that research is below.

Lung Cancer: There have been a number of preclinical and epidemiological studies of tomatoes and their components, which, taken together, indicate a strong possibility of lung cancer-preventive influence of tomato consumption. Lycopene, one of the carotenoids found in tomatoes and tomato products, is the subject of a number of cancer-prevention studies, including lung cancer prevention.

Prostate Cancer: A number of studies have looked at the role of tomatoes and their components in prostate cancer prevention and have found that their consumption may lower the risk of developing prostate cancer, though randomized controlled intervention studies would be needed to know for sure. Some studies have raised doubts about the effects of tomato consumption on cancer in general and on prostate cancer in particular, though some researchers postulate that it may depend on the type and stage of the tumors.

Breast Cancer: A 2014 study looked at the cancer-preventive properties of carotenoids including lycopene and lutein in Chinese women, and concluded that a greater intake of carotenoids was associated with reduced risk in that population.

In general, tomatoes are chock full of healthy components, from fiber and vitamin C to carotenoids, the consumption of which help keep the body and immune system healthy, and a healthy body is more likely to fend off any cancer than an unhealthy one.

Tomatoes come in a wide variety of sizes, shapes, and colors, which is indicative of the long history of human cultivation. The list of tomato varieties is too long to include here but they break down roughly to color and size. Easiest to find at the farmer’s market or in stores are the red varieties, from little cocktail tomatoes to beefy beefsteak varieties. There are also purple and black tomatoes, yellow tomatoes, green tomatoes, even white tomatoes. If you are spoiled for choice, consider using larger red tomatoes in sauces and other cooked foods. You don’t have to worry about losing their health benefits to heat, as cooking actually enhances their efficacy (with the exception of vitamin C). Differently shaped, sized, or colored tomatoes can be a wonderfully eye-catching addition to salads or pies. Regardless of size, shape, or color, choose tomatoes that are heavy for their size, are free of bruises or blemishes (unless they are destined for sauce), and smell, well, like tomatoes.

Tomatoes are generally safe to eat if you aren’t allergic, however, consumption of unripe tomatoes or other parts of the plant can upset the stomach.

During the month of August, we have put our spotlight on tomatoes. Diving into the substantial recipe catalog of our resident chef, Dr. Linda Doody, we have sampled a delicious no-cook tomato sauce, a delectable caponata, and a perfect panzanella. We’ll close out the month with a Garbanzo Beans in Tomato-yogurt Curry recipe provided by Dr. Doody.

Note: In India, this dish is called channa (or chana) masala, chole masala, or chholay. Lemon juice or amchoor (dried mango powder) can be added for some sourness in the dish. You can also decrease the amount of garbanzo beans in favor of more potato or other vegetables (e.g., cauliflower).