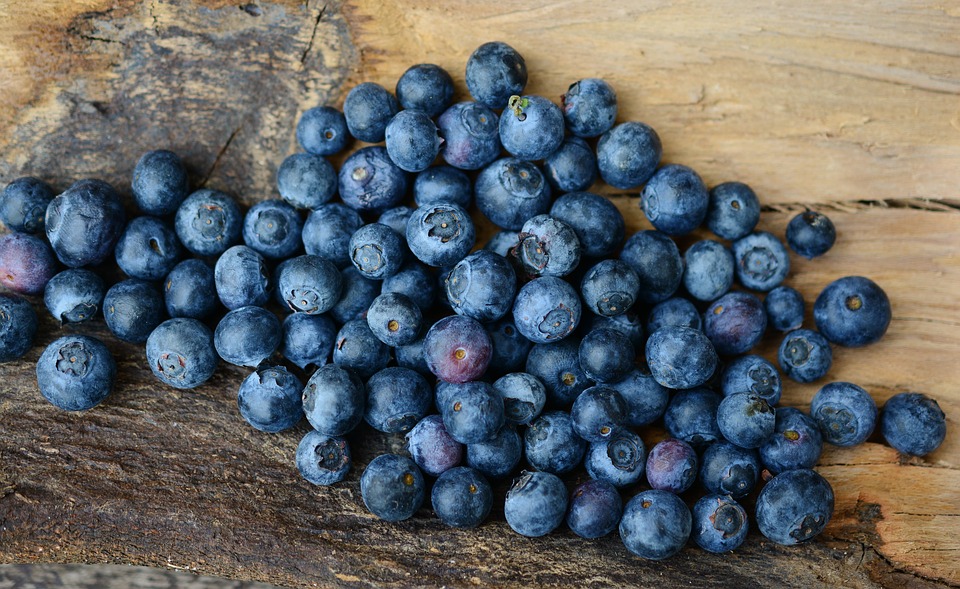 Blueberries (Vaccinium cyanoccoccus) are among only three edible fruits native to North America, and they are arguably the healthiest. The native people of the Americas prized them for their nutritional and medicinal properties. Methods for gathering, preparing, and drying blueberries were among the skills Tisquantum (Squanto) taught the starving English settlers at Plymouth. Native Americans also used blueberry juice as a dye or stain, and more recently, it has been explored as an MRI contrast agent. The blueberry is the state fruit of New Jersey, the state in which the highbush blueberry (the one most commonly found in stores) was first cultivated.

The blue’s but a mist from the breath of the wind,

A tarnish that goes at a touch of the hand

Blueberries rank among the highest of all fruits in terms of antioxidant content (wild blueberries rank highest), are low in calories (just 100 in a cup), high in fiber, rich in vitamins K1 and C, and manganese, and they also contain vitamins E and B6, and copper. Blueberries get their color from a mix of anthocyanins (flavonoids), which are thought to also be responsible for many of the health benefits attributed to them.

Blueberries have been shown in clinical studies to decrease cardiovascular risk factors in obese subjects with metabolic syndrome, improve blood pressure and arterial stiffness in post-menopausal women, and enhance cognitive function and memory in older adults.

The antibacterial properties of blueberry, like its cousin, the cranberry (Vaccinium oxycoccos), are known to stave off urinary tract infection. The mechanism for this is thought to be the ability of two compounds found in the fruits to block adhesion by Escherichia coli to the bladder mucosa. These compounds are fructose and a little-understood polymeric compound that only occurs in the two berries.

A survey of 75,929 post-menopausal women over 24 years concluded that higher intake of blueberries and peaches/nectarines was associated with lower risk of ER– breast cancer than in the general population.

While there have been few clinical trials looking at the therapeutic or preventive effects of blueberries on cancer, there have been several preclinical studies that have shown promise, some of which are outlined below.

Blueberry extracts have been found to have a dietary therapeutic effect in animal models of acute myeloid leukemia. The research also suggests that blueberries may enhance the anti-cancer effects of traditional therapy.

Multiple berry types including blueberries have been found to inhibit esophageal tumorigenesis in carcinogen-treated rats. A 2010 study found that raspberries, strawberries, blueberries, noni, and açaí berries all affected tumor incidence, multiplicity, and size, as well as levels of inflammatory cytokines.

Blueberries are high in pterostilbene, a compound that has shown preventive and therapeutic promise in a number of diseases in multiple preclinical trials. While similar in structure to resveratrol, it has been shown to have four times resveratrol’s bioavailability in rats.

Nothing more than an empty house, the warm hazy weariness from a day spent setting strawberry runners in the sun, a glass of cool sweet milk, and a shallow dish of blueberries bathed in cream. ~ Sylvia Plath

In North America, blueberry season runs from April to October, but you can find blueberries in most grocery stores year-round thanks to imports from South America. Choose firm, dark blue, berries that have a silvery coating, which is a natural protectant. Blueberries must be ripe at purchase, as they will not continue to ripen once picked. Avoid shriveled, mushy, or moldy berries, for obvious reasons.

Kept in the refrigerator, freshly picked blueberries can last up to two weeks, but only wash them right before use, since water will speed up deterioration. They will keep for up to a year frozen, packed in a 3:4 sugar/water syrup. Blueberries can also be canned or dried.

Blueberries are delicious baked into muffins, pancakes, or pie, and they also lend sweet complexity to such savory dishes as grilled salmon, pork tenderloin, and even pizza! After dinner, if you are so inclined, you can relax with a blueberry cordial or homemade blueberry soda.

They can also be made into a natural dye.

Depending on where you live, you may be able to bypass the grocer altogether and grow your own blueberries.

Blueberries grow best in full sun and acidic soil with good drainage. Plant early in the spring, and fertilize one month after planting. It’s a good idea to use bird netting to protect the berries, unless you are inclined to share. Birds love them!

They also grow well in containers, with the same requirements as above.

Blueberries may lower blood sugar; monitor your blood sugar carefully when using if you have diabetes, particularly if you are on blood-sugar lowering medications.

This delicious recipe was adapted from The Washington Post