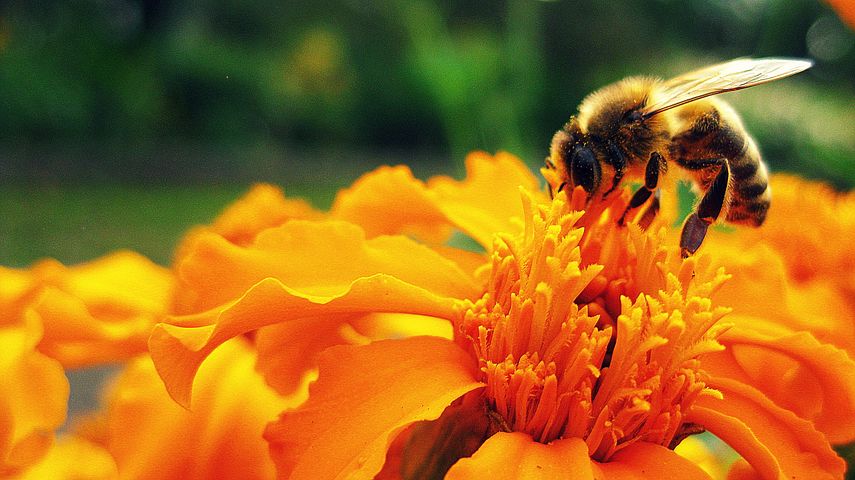 ~A.A. Milne’s character, Winnie-the-Pooh, in The House at Pooh Corner

Honey is a golden thread that runs throughout human history. Prized for its sweetness, its high nutritional value, and its medicinal properties, the very word has come to signify the person one loves best. Honey gathering is depicted in 15,000-year-old cave paintings and on the walls of tombs and temples in Ancient Egypt, where it was said to be the tears of the sun god, Re. The Ancient Egyptians, Assyrians, Chinese, Greeks, and Romans treated wounds, burns, and gastrointestinal disorders with honey, taking advantage of its antimicrobial, antibacterial, and antiinflammatory properties, and modern research is beginning to prove them right. Honey’s potent antibacterial properties have long been recognized, though they are only now beginning to be understood.

The pedigree of honey
Does not concern the bee;
A clover, any time, to him
Is aristocracy.

~Emily Dickinson, The Pedigree of Honey

Honey’s antibacterial and antiinflammatory properties have been known for centuries, and its potential in wound and burn healing has been clinically demonstrated. Honey has been found to shorten the duration of diarrhea in infants and children suffering from gastroenteritis, and it can safely be used as a substitute for glucose (in combination with electrolytes) in oral rehydration solutions. Applied topically, it has also shown benefits against diaper rash. Honey’s antibacterial properties have been demonstrated in vitro, and it has been found to have antimicrobial,  antifungal, antiinflammatory, and antioxidant activity as well. Honey has also been shown to exert a cardio-protective effect in rats, and antibacterial Medihoney® has been shown to be effective against various multi-resistant microorganisms.

There has been little clinical research into the anticancer effects of honey, but a number of in vitro and in vivo studies have shown promise, and honey’s wound healing and positive gastrointestinal effects are being studied as adjuncts to standard oncological care.

Honey is rich in polyphenols, which have been found effective against various cancer cell lines, and various honeys have been studied for their antitumor effects, including tualang honey, which was shown to induce apoptosis in human breast and cervical cancer cell lines, and jungle honey, which has been shown to reduce tumor size in a murine model of lung cancer, as assessed by growth of Lewis lung carcinoma/2 cells.

A clinical study published in 2008 also demonstrated honey’s effectiveness against mucositis resulting from concomitant radio- and chemotherapy in patients with head and neck cancer.

Despite all of the good news above, there is cause for concern. Bees, of course, are the producers of the bulk of the world’s honey, and they are dying off in shocking numbers. During the year ending March 31, 2018, US beekeepers reported that 40% of their hives died unexpectedly, and it is possible that climate change is among the culprits. Changes in weather patterns across the United States may affect bees’ ability to forage for food, and make them more susceptible to such hazards as pesticides, viruses, and mites. Research is ongoing, and no one variable is likely to be the sole culprit, but there is no question that bees are in trouble.

The 40% colony loss reported for the year ending in March 2018 was actually the second-lowest number in seven years, which is not a good sign for the bees, and that’s also bad news for the rest of us. Bees are of course necessary for honey production, but they are also the primary pollinators of food crops in the US.

How you can help

There are a number of things that you can do to help stem the tide of honeybee loss, including planting your own bee garden, buying local honey from local beekeepers, avoiding pesticide use, and even taking up beekeeping yourself. Changing your habits may seem like a drop in the bucket, but every drop counts!

If you want to gather honey, don’t kick over the beehive. ~Dale Carnegie

Though many of honey’s touted benefits have either been debunked or remain unproven, research backs up honey’s effectiveness as a wound dressing and in the treatment of topical infections. Manuka honey is the most researched variety, and the one most often found for sale medicinally. It contains the highest concentration of methylglyoxal, which adds to its antibacterial potency. Manuka honey is given a unique manuka factor (UMF) rating by honey producers, and to be potent enough for medicinal use, it must have a UMF rating of 10 or higher. Look for manuka honey labeled “UMF Manuka Honey” or “Active Manuka Honey.” Only honey that meets the UMF minimum of 10 will bear those labels. Medical-grade honey can be found online and at drug and health food stores. It can be purchased in tubes, jars, or saturated adhesive pads for ease of application.

Choosing honey for culinary use, you can go the easy route and pick up a jar at the grocery store, or you can stop by your local farmer’s market (or better yet, your local beekeeper) and purchase a jar or two closer to the source. Keep in mind that the taste of a given honey will be affected by the flowers on which the bees who produced it foraged, and the color of the honey will also vary depending on the same variables.

If kept in a water-tight container, honey will last indefinitely. In fact, archeologists have found perfectly edible, 3,000-year-old honey in ancient Egyptian tombs.

Honey is safe to consume and apply topically for most adults, with the exception of those individuals who are highly allergic to pollen. Raw honey should never be given to infants and children under the age of 12 months, due to the slight risk of botulism poisoning.

Adapted from Bites for Foodies