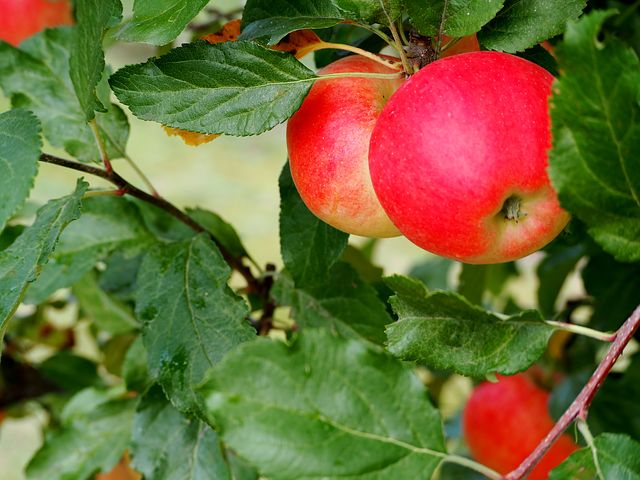 Apples (Malus pumila) are among the most familiar fruits in the Western diet. You can compare them to oranges, have one of your eye, upset a cart of them, or live in the big one, but will eating one a day really keep the doctor away? It turns out it just might help.

Apples are a member of the Roseaceae family, along with plums, peaches, pears, cherries, and other fruits. They originated in Kazakhstan, where their wild ancestors still grow. Apples were originally grown for hard cider production, but as sweeter varieties were developed and cultivated, they grew in popularity as a snacking, juicing, and cooking fruit as well. Today 7,500 varieties of apples are grown throughout the world, of which 100 are grown commercially in the United States.

Apples and their constituents have been shown to improve heart health, protect against atherosclerosis, asthma, and Alzheimer’s disease, reduce the risk of type 2 diabetes, boost weight loss, enhance bone health, and protect the GI tract, and apple pectin preparations were used to help clear the radioactive load in the systems of children affected by the fallout from the 1986 nuclear reactor meltdown at Chernobyl.

A bio-artist by the name of Joe Davis is currently working with a lab at Harvard Medical School to encode the entirety of Wikipedia into the apple genome, and create, quite literally, a “Tree of Knowledge.”

Apple consumption has been shown to protect against various malignancies in clinical, animal, and in vitro studies. Below is only a partial list of promising studies that have been undertaken to explore the ubiquitous fruit’s chemopreventive and chemotherapeutic potential.

In 2005, a hospital-based case-control Italian study of over 6000 subjects concluded that consumption of one or more apples per day was associated with reduced risk of a variety of cancers, and a 2007 study collected diet and lifestyle information on 478,590 subjects and determined that apple and pear consumption significantly reduced the risk of lung cancer.

There have been a number of animal studies of the effect of apple and apple constituents on colon cancer.

Consumption of cloudy apple juice has been shown to have a cancer-preventive effect in the colons of DMH-treated rats, and a follow-up study found the whole juice to be more effective than its individual components. A study in 2005 found that apple procyanidins caused a significant reduction in number of human colon cancer-derived lesions in a rat model of colon cancer, compared with control animals, and a follow-up study found that apple procyanidins enhance polyamine catabolism and reduce its biosynthesis activity in similar ways to known inducers of SSAT but lacked their toxicity, prompting the researchers to suggest that they show chemopreventive and therapeutic promise.

Apple and apple constituents have also been shown to be effective against breast cancer in animal and in vitro studies. Whole apple extracts given at doses equivalent to human consumption of one, three, and six apples a day inhibited mammary cancer in a dose-dependent manner in a rat model. In a follow-up study, rats were given whole apple extracts starting two weeks prior to induction with DMBA, and apple extract was again found to inhibit tumor development and size in a dose-dependent manner.

NF-κB is a transcription factor that interferes with chemotherapy by increasing cell proliferation while inhibiting apoptosis, which makes inhibiting its activation important in the fight against cancer, and in 2007, apple extracts were found to do just that. Apple extracts have also been found to inhibit the proliferation of estrogen-dependent and -independent human breast cancer cells through modulation of the cell cycle.

Quercetin, a flavonoid abundant in apple skin, has been found to inhibit pancreatic cancer growth in cell-based and animal studies, and has displayed chemopreventive and therapeutic activity against prostate cancer. Quercetin has also been demonstrated to repress androgen receptor expression in prostate cancer cells.

Only the few know the sweetness of the twisted apples  Sherwood Anderson, Winesburg, Ohio

Most grocery stores offer several varieties of apples year-round, though they are freshest, and therefore at their best, during the fall and winter months. Look for firm apples with no soft spots. Smaller apples tend to remain fresh the longest.

Suggested varieties by intended use (from the kitchn.com):

In Greek mythology, Eris, the goddess of discord, tossed a golden apple inscribed to the fairest into a wedding feast of the gods. This caused infighting between Hera and the other goddesses, which eventually led to the Trojan War.

Apples are safe for most people to eat, except for those who are allergic to them or to other members of the Rosaceae family, which includes apricots, almonds, strawberries, plums, pears, peaches, raspberries, loquats, cherries, quince, and strawberries.

If you take fexofenadine (Allegra®) apple juice may decrease the effectiveness of the drug.

Apples ranked fourth on the EWG’s 2017 Dirty Dozen list of the most pesticide-laden produce, so it is advisable to stick with organic. If you can’t find organic apples, washing them with baking soda will get more of the pesticide residue off than can be removed by simply rinsing with water.

If you want to make an apple pie from scratch, you must first create the universe — Carl Sagan