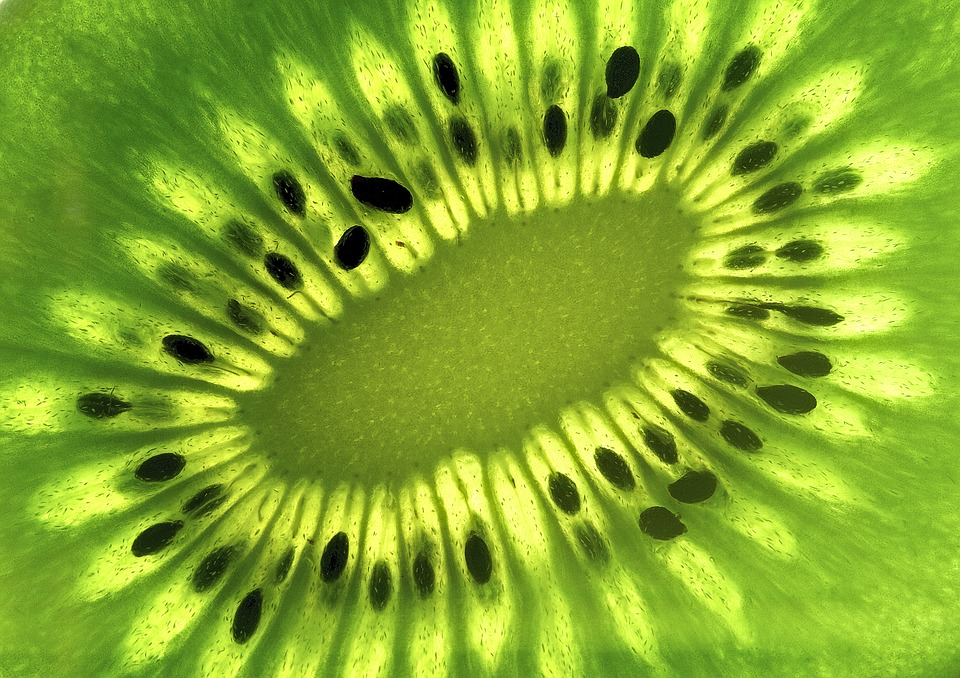 Kiwifruit Ceviche for a Crowd

Long revered in traditional Chinese medicine for its beneficial effects on the spleen, liver, and stomach, kiwifruit (Actindia deliciosa; AKA Chinese gooseberry) has begun to catch the eye of modern science. Kiwifruit originated in China and was brought to New Zealand at the turn of the 20th century, where it soon gained popularity and the name by which it is best known today. Outwardly fuzzy, brown, and unassuming, these large berries look a lot like the birds whose name they now bear, but cut one open and you’ll be treated to an emerald sunrise.

Kiwifruit is as healthful as it is delicious. The 42 little calories you’ll find in a single kiwifruit are packed with 106% of the recommended daily allowance of vitamin A, 0.8 grams of protein, 2.1 grams of fiber, 64 milligrams of vitamin C (more than most other fruits), 252 milligrams of potassium, and 17 milligrams of folate. Kiwifruit are also an excellent source of vitamin E, copper, vitamin K, choline, magnesium, phosphorus, and vital carotenoids like lutein, which helps fight macular degeneration. Kiwifruit also contain fisetin, as well as ursolic, caffeic, and betulinic acids, all known to have anticancer potential.

Someone once threw me a small, brown, hairy kiwifruit, and I threw a wastebasket over it until it was dead.

Kiwifruit has been used as a digestive aid in Chinese traditional medicine for centuries, and Western medicine is beginning to show us why. Kiwifruit contains actinidin, an enzyme that helps break down protein, so much so that it is sold commercially as a meat tenderizer. An in vitro study in 2010 showed that kiwifruit extract significantly enhanced the breakdown of various proteins, and clinical study of subjects with irritable bowel syndrome found that eating two kiwifruit a day improved their bowel function. The researchers believe that kiwifruit’s high fiber content works in tandem with actinidin to stimulate receptors in the colon and create a laxative effect.

Actinidin is also helpful in wound healing. In 2014, a randomized clinical study found that actinidin accelerated healing of diabetic foot ulcers, and a similar study in 2015 showed the enzyme is equally beneficial in accelerating the healing of bedsores. A study in rats in 2010 concluded that kiwifruit has a “dramatic antibacterial, debridement, wound contracture, and angiogenic effect” in wound healing in burn ulcers.

In 2000, researchers in Italy surveyed 18,737 children about their consumption of fruits high in vitamin C, like kiwifruit, and found that low consumption of such fruits during the winter resulted in a markedly higher rate of wheezing in children.

A 2011 clinical study concluded that consuming two kiwifruit 1 hour before bedtime helped to improve sleep onset, duration, and efficacy in adults with self-reported sleep disturbances. Another clinical study published in 2013 concluded that consumption of the golden variety, Actinidia chinensis, for 6 weeks had a positive effect on mood in young men. The researchers postulated that the high levels of vitamin C in kiwifruit may have been a factor.

A study in mice conducted in 2007 determined that extracts of A. deliciosa and A. chinensis  significantly enhanced antibody responses to cholera and diphtheria/tetanus vaccines, and promoted interferon-γ and natural killer cell activity.

There has been one clinical trial with kiwifruit. Single constituents of kiwifruit—fisetin, and ursolic, betulinic, and caffeic acids—have also been assessed for their anticancer potential in animal and cell-based studies.

Kiwifruit, as a single dose and in longer-term supplementation trials in humans, has been found to protect cellular DNA from damage due to oxidative stress, which is a known factor in tumor development.

In Vitro and In Vivo Studies with Single Constituents of Kiwifruit

Kiwifruit are rich in ursolic acid, a triterpenoid considered a promising tool in the fight against cancer. A study published in February 2017 found that ursolic acid induced oxidative-stress-mediated biphasic response in human breast cancer cells. The researchers concluded that ursolic and betulinic acids induce changes in the glycolic pathway that result in cancer cell death. A study in 2016 also demonstrated that ursolic acid induces apoptosis in chronic myelogenous leukemia cells. Ursolic acid works in concert with imatinib, overcoming resistance and enhancing the drug’s cytotoxicity.

A Canadian study published in early 2017 found that caffeic acid, which is abundant in kiwifruit, works in tandem with metformin to induce apoptosis in cervical cancer cells in vitro. The researchers found that the combination was more effective than either caffeic acid or metformin alone.

Kiwifruit are called souris végétales in French, which translates to “vegetable mice.”

In the United States, kiwifruit are in season September through May, though they can be found in grocery stores year-round. While there are over 60 varieties of kiwifruit, you will typically find only the green (A. deliciosa) and gold (A. chinensis) varieties in US grocery stores. Look for firm, unblemished fruit that give slightly with gentle pressure. Kiwifruit will keep for several days on your kitchen counter, or up to 4 weeks in the refrigerator. One study found long-term cold storage increased the levels of antioxidants in kiwifruit.

Kiwifruit is likely a safe food for most people. If you are having surgery or have a bleeding disorder, you should check with your doctor before eating large quantities of the fruit because it may slow clotting. Avoid kiwifruit if you are allergic to produce that contains actinidin or to latex. Use caution when first trying kiwifruit if you are allergic to pineapple, banana, or papaya. Allergic reactions to kiwifruit include difficulty swallowing, vomiting, and hives.

Kiwifruit consumption is safe for pregnant and nursing mothers who aren’t allergic to it, and it may even be beneficial, due to its high folate content.

While you may as well just cut a kiwifruit in half and scoop out the green or golden goodness with a spoon, A. deliciosa and A. chinensis are a delicious and colorful addition to fruit salads and smoothies. You can bake kiwifruit in a tart (though you will lose some of the nutritional benefit through heating), layer it onto a pavlova, mix it into a salsa, or pile it on your salmon. While you are getting creative with the fruit’s colorful flesh, wash the skin and nibble on it, too! It is extra nutrient rich.

Kiwifruit Ceviche for a Crowd