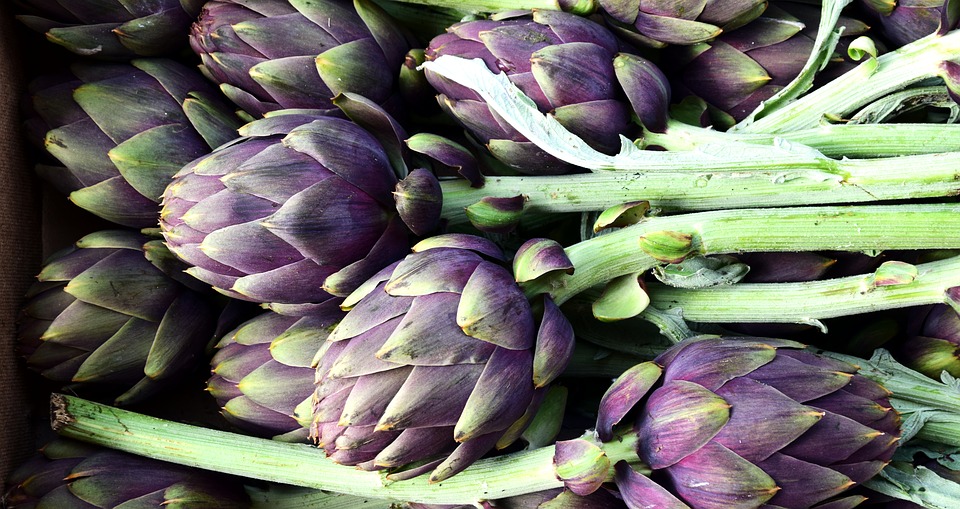 The artichoke (Cynara scolymus) has long been revered as a delicacy and for its medicinal properties. The plant is thought to have originated in the Mediterranean, and mention of it can be found in Greek mythology and in the writings of ancient Greek and Roman philosophers and physicians, as well as on the walls of ancient Egyptian tombs.

The part of the artichoke plant that is most often eaten is the bud, which, when allowed to flower, opens into a large blue-violet, thistle-like bloom. The buds are typically steamed or boiled (you can save the water to drink as a healthy tea) and the sweet meat at the base of each green or purple petal is dipped in mayonnaise or melted butter and scraped off with the teeth until the heart is exposed. The heart is the true delicacy, but the stem holds a secret heart of its own that is an equally delicious treat.

While the ancients prized the artichoke as a food, they also recognized its medicinal properties, using it to quiet indigestion, treat liver and gallbladder issues, and as an aphrodisiac. Modern researchers are finding that the C. scolymus does indeed have medicinal properties. Artichoke ranks seventh on the USDA’s list of 20 foods highest in antioxidants, and the plant is rich in flavonoids and caffeoylquinic acids, including chlorogenic acid, cynarin, luteolin, inulin, scolymoside, and cymaroside, which appear to work together to benefit human health.

Artichoke leaf extract (ALE), where the active compounds are most concentrated, has shown benefits in Hepatitis C, hypercholesterolemia, high blood pressure, and heart disease, liver disorders, digestive issues, and various cancers. For example, artichoke has been used as a liver tonic for thousands of years, and research into the plant’s hepatoprotective properties has been ongoing for decades. A study in 1994 found that healthy volunteers given a single dose of artichoke leaf extract produced significantly more bile than those given placebo. Adequate bile flow is important for liver health. A 2003 double-blind, randomized, placebo-controlled study found ALE to be effective in treating functional dyspepsia. The researchers found that ALE’s effect on bile secretion aided digestion and helped to reduce bloating and feelings of over-fullness.

Scale by scale
We undress this delicacy
And eat
The peaceful pulp
Of its green heart.

Mesothelioma
A phase 2 clinical study in 2014 sought to determine artichoke’s anticancer efficacy in individuals who have been exposed to asbestos and are therefore susceptible to mesothelioma, and while those results have not yet been posted, a study in 2015 showed that ALE affects the growth, migration, and tumor engraftment of mesothelioma cells in vitro, and that dietary ALE showed similar efficacy to pemetrexed in xenograft-transplanted mice.

There have been several promising cell-based studies in breast and pancreatic cancer and leukemia:

Breast Cancer
A study published in 2015 found that low doses of artichoke extracts (AEs) show chemopreventive activity by inducing premature senescence in breast cancer cells. The researchers also found that high doses of AEs induce cancer cell death in breast and other human cancer cell lines, and the researchers hypothesized that “AEs may selectively inhibit the growth of tumour cells with little or no toxicity on normal cells.”

Interestingly, a study published in 2013 in Food Chemistry demonstrated that luteolin (a flavonoid found in abundance in artichoke) sensitized tamoxifen-resistant breast cancer cells to the chemotherapeutic drug.

A 2012 study found that polyphenolic extracts of the edible parts of C. Scolymus induced apoptosis in and decreased the invasive ability of human breast cancer cells.

Leukemia
In 2008, results from treating leukemia cells with varying concentrations of ALE for 24 hours suggested the extract exerts anti-proliferative and apoptosis-inducing activity.

Where to Find Artichokes and Their Derivatives

The part of the artichoke plant that is most often eaten is the bud, which, when allowed to flower, opens into a large blue-violet, thistle-like bloom. The buds are typically steamed or boiled (you can save the water to drink as a tonic) and the sweet meat at the base of each green or purple petal is dipped in mayonnaise or melted butter and scraped off with the teeth, until the heart is exposed. The heart is the true delicacy, but the stem holds a secret heart of its own that is an equally delicious treat.

Fresh artichokes are available year-round in most grocery stores, and if you live in a Mediterranean climate, the big, beautiful plants are easy to grow. When purchasing artichokes, look for tight buds that feel heavy for their size. Artichoke hearts are also available canned and jarred, and artichoke tea can be found at most health food stores.

There are very few precautions to pay attention to when taking artichoke medicinally. Because of its stimulatory effect on bile production, people with liver disease should take ALE with care and only according to the advice of their physician. The same holds true for individuals with gall bladder disease or gallstones. Artichoke leaves may cause contact dermatitis in people who are allergic to certain plants, and in rare cases, taking ALE may cause a systemic reaction in people with such allergies. Check with your doctor before using ALE if you are allergic to arnica, chrysanthemums, daisies, marigolds, or ragweed.

While the fleshy parts of the petals and the tender “heart” at the base of the flower are the most typically eaten parts of the plant, the insides of the stems are equally delicious. The antioxidant-packed leaves can be brewed as a tea. Iced artichoke tea is common in Southeast Asia, where it is often brewed with sugar and herbs. The tea is believed by many to improve digestion, act as a liver tonic, aid in weight loss, and reduce cholesterol (and as you can see above, there is scientific evidence to bear those beliefs out). One of the most popular ways to cook artichokes is boiling, and many people drink the water for the same reasons as the tea. Artichokes can also be whipped into dip, cooked with pasta, and even made into cookies and popsicles.