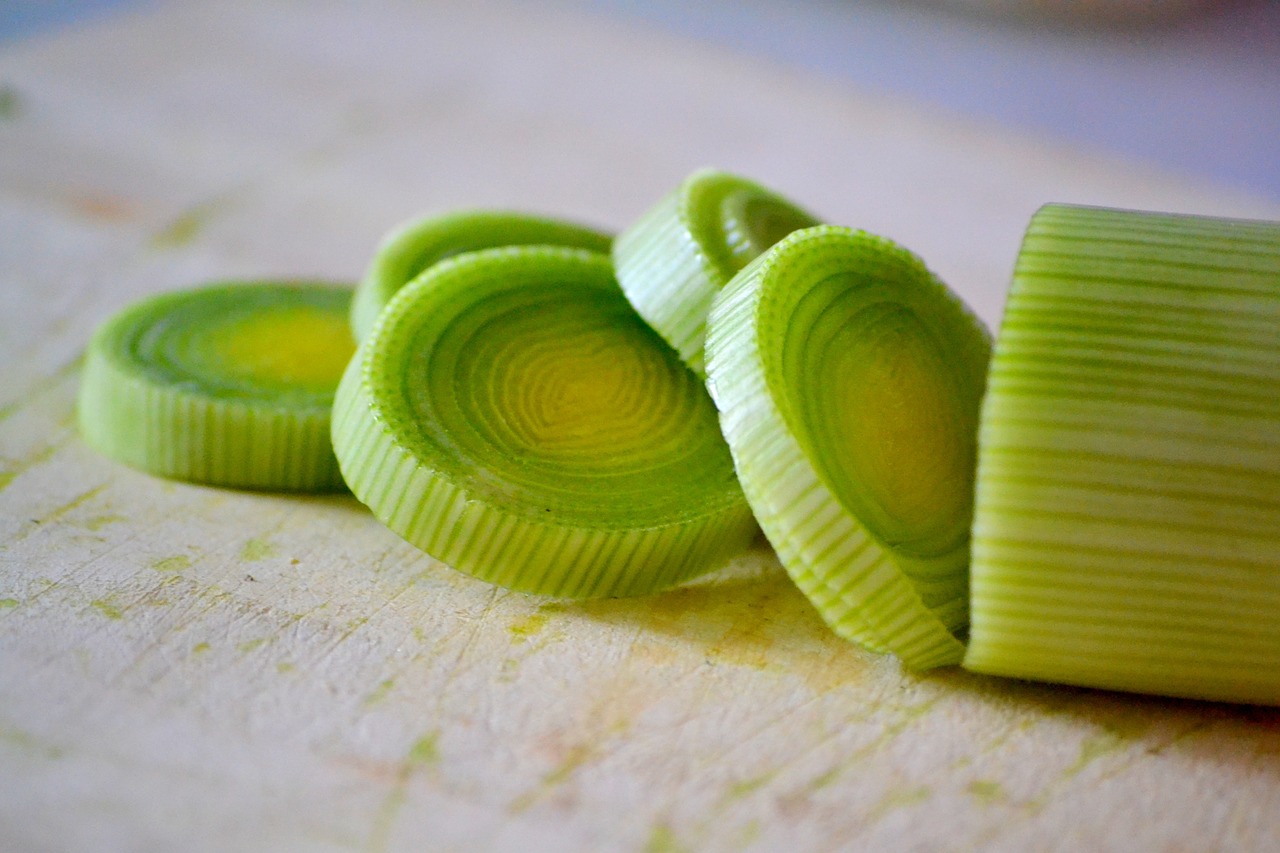 It’s been raining a lot here in Northern California, and rainy days are perfect for making soup, chili, and all other warm, broth-filled dishes that keep us cozy. So, we’ve decided to share a quick and easy way to make your own vegetable broth to use for anything! We recommend making a large pot because you can freeze it to use later.

All of the vegetables in this broth have healthy benefits. Today, we will focus on leeks. Other than their notable cancer-fighting attributes (which we will describe below), leeks are particularly good sources of vitamin A, C, and K as well as folate and manganese. Vitamin A helps maintain healthy skin, teeth, and eyes. Vitamin C is well known in its ability to help fight off colds (and scurvy). Vitamin C also appears to help brighten your mood! Vitamin K is important for bone health and wound healing. Folate may decrease the risk for heart disease and pregnancy complications. Manganese is possibly effective for osteoporosis. You can see more about the nutrition profile of leeks here.

The chemopreventive effects of Allium vegetables—leeks, garlic, onions, chives, and shallots—have been studied extensively. Epidemiologic studies indicate some association of Allium vegetable consumption with decreased risk of cancer. The majority of supportive evidence on Allium vegetables’ cancer-preventive effects comes from mechanistic studies of various preparations and extracts of these vegetables and individual sulfur-containing compounds. Allium vegetables and their components have effects at each stage of carcinogenesis and affect many biologic processes that modify cancer risk. These studies have been done in the laboratory, and human trials are still needed for definitive proof. If you’re interested, a good review on this subject is available here.

Epidemiological evidence for Allium vegetables prevention of prostate, gastrointestinal, and head and neck cancers has been explored. In a meta-analysis of 19 case-control and 2 cohort studies, consumption of high levels of Allium vegetables (20 g/day of Allium vegetables or approximately the average weight of one garlic bulb) was found to reduce the risk for gastric cancer. Specific analyses for onion, garlic, leek, Chinese chive, scallion, garlic stalk, and Welsh onion yielded similar results. Consuming Allium vegetables has also been correlated with a significant decrease in risk for prostate cancer based on a meta-analysis of nine epidemiological studies consisting of six case-control and three prospective cohort studies. However, in the subgroup analysis stratified by allium vegetable types, significant associations were observed for garlic but not onions (type of onion not specified). Pooled data from eight case-control studies have found an inverse association between high onion intake and head and neck cancer risk.

More than one compound in leeks is responsible for its cancer prevention properties. These include inulin, diallyl trisulfide, allicin, and kaempferol. Inulin is a fiber in the fructan family (not to be confused with fructose) that stores energy in plants. In a study published in Genetics and Molecular Research, inulin was found to have antimutagenic properties—meaning it was able to protect DNA from damage that causes mutations. Mutations from damaged DNA are often considered to be the reason many cancers form. Diallyl trisulfide has been shown to stop the growth of new tumor cells in mice and prevent blood vessels from forming within existing tumors—one way in which cancerous tumors ensure their continued growth. Leeks also contain allicin, an organosulfur compound that produces propenesulfenic acid which in turn neutralizes the spread of free radicals. Low amounts of free radicals in the body are associated with a lower possibility of cancer. Finally, one of the most interesting compounds in leeks is kaempferol. This antioxidant is associated with anti-cancer activity in various cancer cells including colon, brain, breast, and ovarian.

Leeks are at their peak freshness during the winter and early spring. Choose long, firm, white stalks with a root bulb no larger than 1.5 inches in diameter. The smaller the stalk, the better the texture. Store them straight from the store (no trimming or washing) in a dark fridge, as light can shorten their lifespan. When ready to prepare for eating, first rinse the vegetables thoroughly to remove any dirt or sand. The white and light green portions are eaten; the darker leaves typically are not. The dark green leaves can go into your soup stock. Cut leeks about a quarter inch below where the leaves fan out and cut the root end of the leek off; cut the white stalk to suit. Leeks are eaten in many ways—streamed, boiled, sautéed, baked, or raw. The highest concentration of antioxidants is maintained when steaming leeks compared to boiling.

If you have calcium kidney stones, it is advised to limit leek consumption as they are high in oxalate.

Tip: we usually do this after we've made a dish that requires these or similar vegetables. You can put all of the discarded pieces of the vegetables into the boiling water. That way, you don't waste any of the vegetable scraps, but you also don't have to waste the good parts of the veggies in your boiling broth.